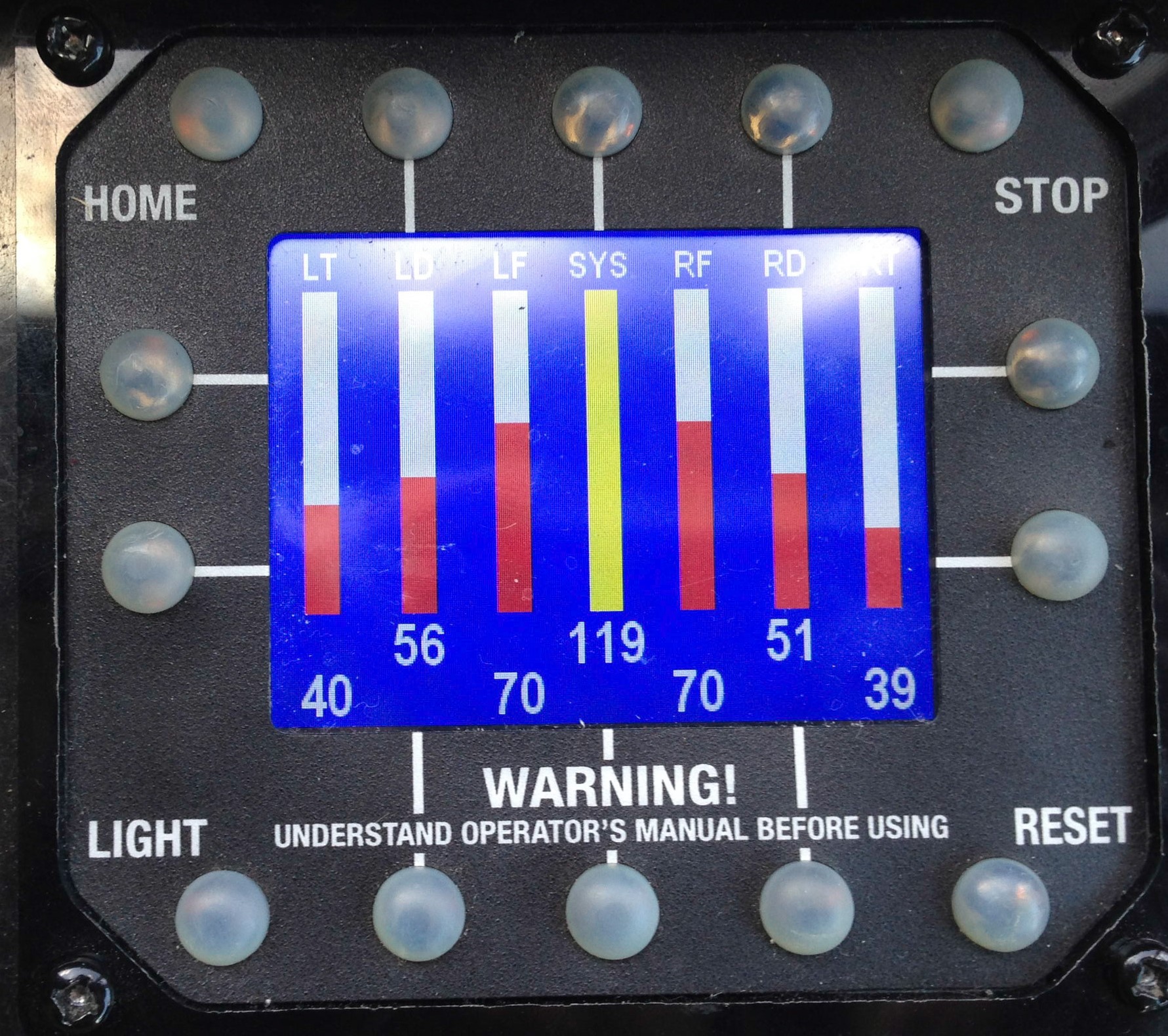 My coach was taken into the dealer for warranty repairs of a few small items on Tuesday April 23. Friday I went to pickup the coach as it was supposed to be fixed. When the tech drove it around front, the buzzer for jack down was sounding, and the coach air bag on front left was empty.

No problem I thought, just hit reset. I did this, air went into all the bags normally, and all was well. I hooked up the toad, and left the dealership. I was ½ mile down the road, and alarms went off again, saying that my right front air bag was empty, but the coach felt like the front left was empty. I pulled into a parking lot, and sure enough, the front right was FULL, and front Left was empty.

There is a screen on the HWH that shows the pressure of each air bag. It was reading 0 for the Front Right, and 15 for front Left.

So now I was wishing that I had actually printed the manual and read it at least once, because I did not know what to do. The coach was in a twist, and I did not want to continue driving like this. I dumped all the air, and called HWH customer service.

The operator took a message, and I was told to expect a return phone call that day. I wasn’t sure how long that would take, so I kept doing the same thing over (definition of insanity right) EXPECTING a different result. I tried power resets, I looked for loose wires. I assumed the dealer must have done something like a slow power drain to 10v or disconnected a cable.
After about 30 minutes, I got a phone call from Joe @ HWH. Described the problem, and he had me go through a series of tests to verify that the system was acting normal. One of this was to air level the coach. I did this, and the coach did level properly. I could also manually add air to the system and bring it up to normal ride height, but as soon as I started driving, it went out of sync again.

Then Joe told me to do something that I already knew, but just wasn’t thinking of…hit the STOP button once the coach is at the proper ride height. Very simple, all done on the inside of the coach. Magically the coach was drivable!
Joe left me in a drivable position, and hung up to discuss the plan of action with the powers that be. I decided to return the coach to the dealer, as there was still a problem with the dash air, and slide.

Monday morning Joe called and said that they believe that a sensor on the air manifold had gone bad. He agreed to overnight it to me, and to pay for a truck service center to remove and install. I informed him that the coach was left at the dealership, and that I wanted to do the repair myself. I had pictures of the air manifold that I took while the system was being installed, and the location was such that if I slid the generator out, it was easy to get to. Joe agreed.

So today, about 30 minutes worth of work, and the new part fixed the problem. A very simple sensor failure, that according to Joe, only 1 other has ever failed. They have requested the part back to inspect it for cause of failure.
I am very confident in the redundancy built into the HWH Active Air system, and now that I have a copy of the manual printed and in the coach, hopefully I won’t forget how simple it is to deactivate and manually air the bags to proper ride height.