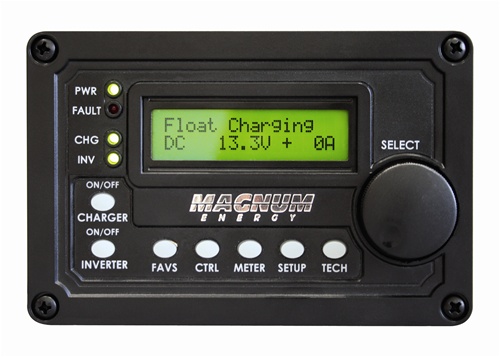 Thought I would put some more of my modifications up. I have been working on installing the ME-BMK in my coach. If you are not familiar, this is a Battery monitor kit that acts like a fuel gauge for the battery bank. It is a far more reliable way to determine state of charge (SOC).

You can read about it here: ME-BMK Battery Monitor Kit

I attempted to get Newmar to install this as a special, and was told no. Well it turns out that there is good reason for it, and the upgrade is very involved with the 2013 Newmar coaches.

The typical installation of a BMK is to install the battery shunt between the load and battery ground, install the ME-BMK-NS device. Provide 12v power to BMK-NS, connect the network to the inverter, and install a sense cable between the BMK-NS and the shunt.

The 2013 Newmar coaches come with the Magnum ME2812 inverter, the ME-AGS-N (auto genstart network version) and the RC-50 remote.

For the features of the BMK, you need the ARC-50. This is the easiest part to swap out, remove 4 screws, unplug RC-50, Plug in ARC50 and install 4 screws. At this point you must reprogram all of your settings. Do this now, as it will not be setup for your battery type.

After installing the ARC50, then I installed the shunt. There are 2 ground bundles connected to the coach. Mine is the all electric, with factory AGM batteries. So I have 8 6v Batteries. From the factory there was a main 0-gauge ground going to the inverter, and then a bundle of about 8 smaller wires going to the main electric panel. These were connected at different points on the battery. For the BMK to do its job properly you need to move all ground wires leaving the battery to the load side of the shunt. In the above picture you will see the shunt installed below the two positive wires. The back side is the load side, and the original wiring from Newmar is attached there. You will see two cables coming off the stud. I had to cut a lot of straps, and then reconfigure the straps so there was no metal rub and the tray could still slide. This wasn’t hard, but took some thought. The front side of the shunt is where the battery connects. I made a custom 4/0 gauge wire, and soldered the ends instead of crimping. Lots of solder..and then shrink wrap the ends to make it look neat. The above picture shows the battery tray extended, and the bottom right ground is my cable connecting the battery to the shunt. Just to the left is the temp sensor for the inverter, this came stock.

The BMK-NS module is installed in the bay closest to the battery, as the sense cable can not be cut or spliced. On the back wall is the black box with the power connection, data cable, and sense cable.

So after getting it all hooked up, I tested and things worked great. my SOC read accurate, I was able to drain it down to 80% and have it shutdown the inverter. Plug in power, and it charges back to 100%.

So then I decided to test AGS. I set the AGS to start at 80% and stop at 90%. Watched it drain down (helped with microwave) and once it hit 80% the generator fired off. After the 60 sec warm up it stopped. Then started again, and this loop kept going.

Frustrated – I double checked everything. In the mean time I had to stop my work, and take the coach to the dealer to get some work done. That was hard..I hate leaving work undone.

When I finally got the coach back I started playing with the settings and discovered that if the ME-BMK-NS is plugged in (either power or network) then the AGS will not function. Even turning it to manual run via the ARC50, it will do the cycle. I could start the generator with the dash switch, my software switch, or from the generator itself, but not from the ARC50.

If I unplug the ME-BMK-NS then it works from the ARC50, but of course now I can’t use SOC to start.

I placed a call to tech support at Magnum Energy, and after 50 minutes of diagnosis the culprit was found.

Here is the diagram and install docs:
http://www.precisioncircuitsinc.com/…structions.pdf

In the mid toilet room, there is a cabinet with all the breakers. This box houses the PCS control.

This picture shows the box removed. Lighting was poor because I had no 12V or 120V…that would have been dangerous.

3 telephone connections are behind. I had to locate the one with black tape (matches cable connected to magnum inverter remote port) and the one with blue tape labeled “remote”, which matches the cable going into the ARC-50.

Once these were located, I unplugged, and connected them together with a telephone joiner.

As soon as that was complete, and I fired it all up, things worked as I expected.

So my next step was to contact Precision Circuits and find out what I could do to make the BMK compatible, and what I was losing by doing the bypass.

I sent an email, and the response was very fast and informative.

Here is the response:

Quote:
PCS also sent me an upgrade document that outlines the complete install steps, and also gives info on what is gained. The biggest gain I can see is the communications is no longer done ‘man in the middle’, but rather part of the RS-485 bus. So instead of being a relay, it now assigns itself an ID on the network, and takes action that way.

Quote:
After I received my upgraded PCS unit, I was able to reinstall it without any trouble. The upgrade fixed the problem I was having with the BMK interfering with the AGS.

I spoke with the owner of Precision Circuits, and he explained that the big difference in pre-upgrade vs post-upgrade is how communication works. The way the unit is shipped from Newmar, the PCS controller talks to the Magnum Inverter, and the remote talks to the PCS unit. The PCS is doing a ‘relay’ of all messages between the two. Works fine, until you do something silly like upgrade or add a component after market. Then it all falls apart because there is too much communication going on.

Post-Upgrade, the PCS is just another device on the bus, and is able to listen to what is going on, and then send requests.

So now when you are on 20 amp service and want to run the microwave, and you are 10 amps short, the pcs will call to the inverter to ‘assist’ as well as override the command from the remote for charger, either doing a setback or shutdown temporarily.

PCS is going to be delivering the new units to all manufactures with this upgrade within the next few months. So earliest you would see this factory installed is mid model year 2014, but most likely it will be a 2015 option.

If you want it now, it only took me 30 minutes to remove and another 30 to reinstall. Shipping cost me $25, and the upgrade was free from PCS.

Overall, this was a bigger project than I expected, but one that I am very pleased with. I firmly believe that every coach should have a BMK, no matter how little you use the battery. This is the only true way to protect your batteries.
***UPDATE 2018-July-04****
I have been using this system for over 5 years now. The original batteries are installed, and they are still working! I keep my coach plugged in all the time when storing, and have kept the SOC set to 70% max usage for my normal habits.
Over the past 5 years, I have manually set it to 50% for the few times that I was boon docking, and dealing with Generator restrictions (ie: National parks). The battery life is absolutely amazing. There is now way these would have lasted as long if I had not installed the BMK.